I'm not sure if I can call this fly a true flatwing or not, but what I do know is that a fly like this has been kind to me. It's easy to make and very versitale in catching many different species of fish. They can be fished in rivers, lakes and oceans and seem to work for everything that eats minnows/baitfish. There's a shit load of movement in this type of fly. The compination of the bucktail and rooster hackle is unbeatable. No wonder that the fish are so turned on about this pattern.


You can start off this article with this video: in Youtube in Vimeo
It's my very first try at making a tying video.

And here's the Step-By-Step pictures:


Materials you need for this fly:

- Bucktail (variety of colors, with a focus on white)
- Rooster hackles. I like the grizzly colored ones, because they make wonderful bars to the back of the fly
- Flashabou
- Some kind of pearl or silver dubbing
- Peacock herls
- Jungle cock or epoxy eyes
- Good quality hooks in various sizes

Good quality bucktail is a must and by good quality I mean that the hair must be a bit hollow from the butt, stiff(ish) at the middle and soft from the top. This type of hair is very "big" when it hits the water and you can tie it pretty sparse. It's very hard to get tangled too, especially tied the way I do it.

For the rooster hackle you can use either the Flatwing saddles, American rooster saddles or American rooster capes. Whiting has some quality stuff. It's just sad that the supply of quality stuff is very thin. It's very hard to get good materials. You can actually leave the hackel (or hackles) out and make the same fly without any feathers. You can't just call it a flatwing any more, can you?...:)  If your using cape feathers instead of saddle feathers, they make a bit stiffer and fuller tail/back to the fly then if your using the saddle feathers. The saddle feathers move better so it's a matter of what your looking for in a particular fly that should steer your choice.

My favorite hooks for these patterns are the Gamakatsu SC15, Sakuma 410 and the Mustad Stinger/Deer hair hooks. Choose the size according to your fishing and the fish that your after.


'
On top of this pattern being very efficent, I think it's very beutiful and super fun to tie!

I hope this gets some of you in the groove of tying Flatwing(ish) flies. Please remember, I'm not the most technical tier and don't have much finesse in my tying. So don't learn my bad habits - you can do the same shapes, forms and movement with more finesse if you got the patience for it.

What I am pretty good at though, is making patterns that move and fish decently and thats more then enough for me. Have fun!!

Keeping it in the review mode and next up is the Echo King twohander...

The Echo King series of fly rods consists of two 13footers - a 9weight and a 10weight. My experiences are from the 9weight.

It has a black finish and deep red wraps on it, which makes it look ageless. I personally appreciate looks like these on a rod. Nice and simple.

The reel seat is a standard, black Echo aluminium reel seat and the grips are made from the new and sweet "HD"-cork. The "HD"-cork is very nice to hold on to when your fishing and it takes a beating without falling apart. I think the cork is a major step forward for Echo as I have had some not that good grips on my previous Echo's.

The action, well it's... Just what you've expect from Echo = smooth and responsive. A very strong butt section that eases off when you get to the middle. Mix in a authorative, but responsive tip and you got the King rod!! It is a delight to cast and you can get some serious distance with it.  I think that the rod is at it's best when lined with a shooting head that has about 700grains of total mass and punched out with a modern two handed single spey or around 650gr if your doing a more pure underhand cast. That for me, were the sweet spots on the blank. For sustained anchor casts with heavy and long tips I would start off with a 660gr skagit and feel my way from there if personal preference tells you that another line would be better. I feel it's not a pure skagit rod so there might be some scenarios where one could say it would need a stiffer tip to throw the biggest junk? Well, that then might throw off the otherwise sweet action. All in all, casting sinking tips, full sink lines and even floaters is a pleasure with this rod. It's one of those rods that you don't have to do much and still it gets your fly where it should be and after a while you don't have to concentrate on your casting at all and just fish. I am a big fan of rods like that and while there may be rods that can produce tighter loops and better looking form, these are the rods that you love to grab when your going fishing and not to the casting pond...


As a fish fighting tool for salmon size fish this rod is the best I've ever used and I really mean it. There's a s#%t load of power in the butt section and you can put some serious pressure on the fish your fighting.

So, if any of you guys are looking for a rod that is nice to handle (13' #9 is much easier to handle and fish then a 14' or 15' #9), can shoot some serious line and will handle big and strong fish, this is the rod for you. Think big chinooks and bull dog chums in BC or the early season atlantic salmon fishery in mid-Norway when your fishing from the bushes. It's durable too!

Tim Rajeff and his crew have a real nack of creating user friendly rods that are relieble, easy to use and very fishy. My hat is off to you. 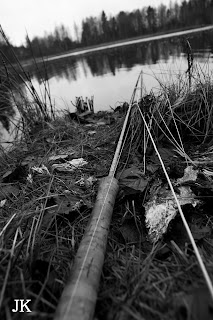 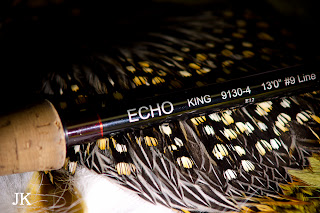 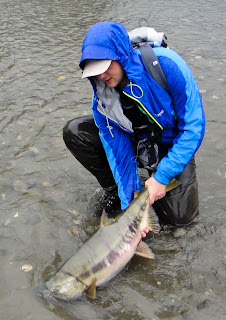 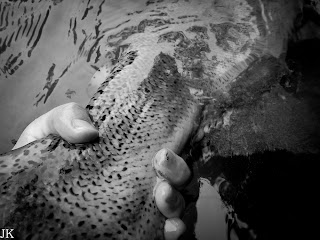 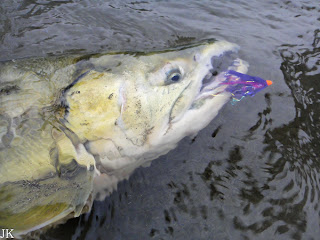 I have been using the new Vision Ace skagit heads a lot this season and thought I'd write some sort of review about them.

The heads are white in color with heavy duty loops at both ends. There's also a print at the front loop that tells you the grain weight of the head. Vision sells them with a ready looped T-14 tip that's matched to the head.

The heads were designed by a group of two handed fly fisherman that I respect a lot: Antti Guttorm, Mattias Drugge and Tuomas Rytkönen. I really dig your style and casting gents!

Tapering on these heads is pretty standard modern skagit head stuff, but I really like the way they engineered the front tapering. It gives you a smooth, but powerful turnover. Just the way I like it!!

Actually the front tapering is so nice that this line has become my favorite head for intermediate and sink 2/3 tips and smaller tubes/doubles. The straight, no kinks turnover makes it nicer to use with lighter stuff then some of the other skagit heads around. But don't get me wrong, it's by no means a "ladys" skagit and it will turn heavy tips and bulky flies. It just does it in style.

I'm a bit of a weirdo and like to do things my own way so I also use these lines as a normal shooting head with single speys and they work like a charm for that stuff also. I think the beuty of these heads is the fact that you can use say a 520gr as a "real" skagit on your 7wt and use the same line as a normal shooting head on your 8 or 9wt rods with lighter tips. So don't be afraid of the label - you don't have to use it as a true and blue skagit. You can just think about it as a very good scandinavian shooting head on steroids!

These powerful, modern and versitale shooting heads with the skagit label on it, have been my go to lines for many years now, so it's nice to have another option out there. I just love the way they fish and cast and it's been nice to see that other people are also starting to use them. Go Ace of Spey!!

Some pics and a dorky youtube clip that I made about the line.

Hi all and greetings from the lovely Gaula river in Norway.

Had my first try at the premier on Gaula and it was an intresting week... There was the usual ups and downs of atlantic salmon fishing and the fishing was a stricktly sunk line affair.

I was personally a bit "out" because I've never really done this type of heavy duty sinking line fishing before and it was a true learning experience for me. Skagit lines and intermediates with tips we're WAY too light for the flows we fished in so it was sink2/3 to SinkYourAssOff as our go to lines.

It was a real university of early season salmon fishing and it was a delight to fish in the same team with the Professor Frode Olderkjaer - a man of 2000++ salmon on the fly. It was very inspiring to see how simple things can be when you know what your doing. He had a very down to earth and simple method of fishing and I learned a lot from him.

The total for our four man fishing team was 15 fish, but it was mainly Frode that was doing the catching with 11fish!!! Needles to say I had a lot of fish handling to do and we released most of the fish.

My friend Ilkka caught the biggest of the week with a beutiful 11,5kg cock fish - he also caught a 9kg fish.

Yours truely caught a 8kg and 10kg fish, so all in all it was an ok week of fishing.

Here's a few pics and I'll be back in a while with more:

Spend the weekend a few weeks back with my friends in Särkisalo which is at the southwest corner of Finland by the Baltic Sea. Had a very, very fun time fly fishing for pike, eating mediocre food and drinking lots of beer and red wine.

Mother nature was not cooperative with us because the weather was terrible the first two days we were there, but that's okay cause it left more time for you know what... DRINKING!:).

Even though our time on the water was limited we had about 30 small pikes in the boat that weekend so it was not that bad fishing wise eather. I really enjoy pike fishing, but don't have any real passion for it - it's more of a pass time then a real passioned sport for me. Still it's the best fishing we got here in southern Finland and that makes me a bit sad...

Here's a few pics of the trip. 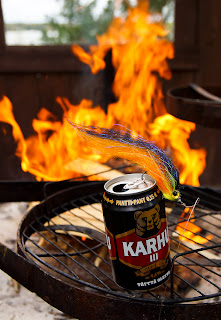 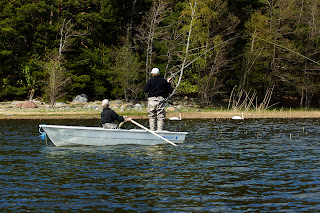 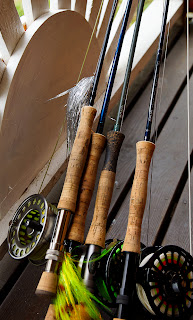 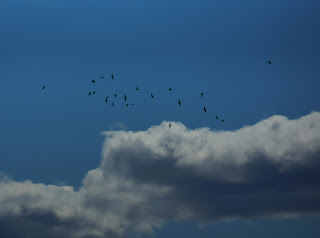 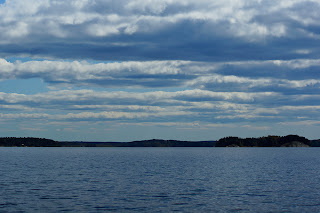 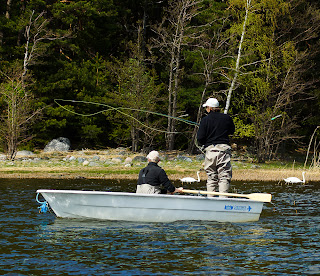 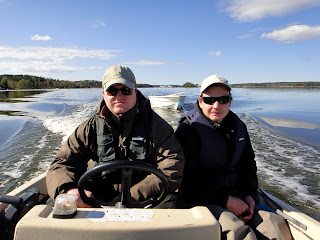 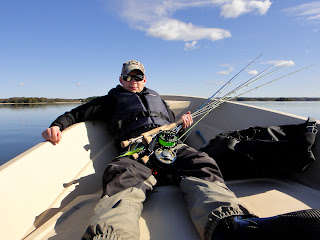 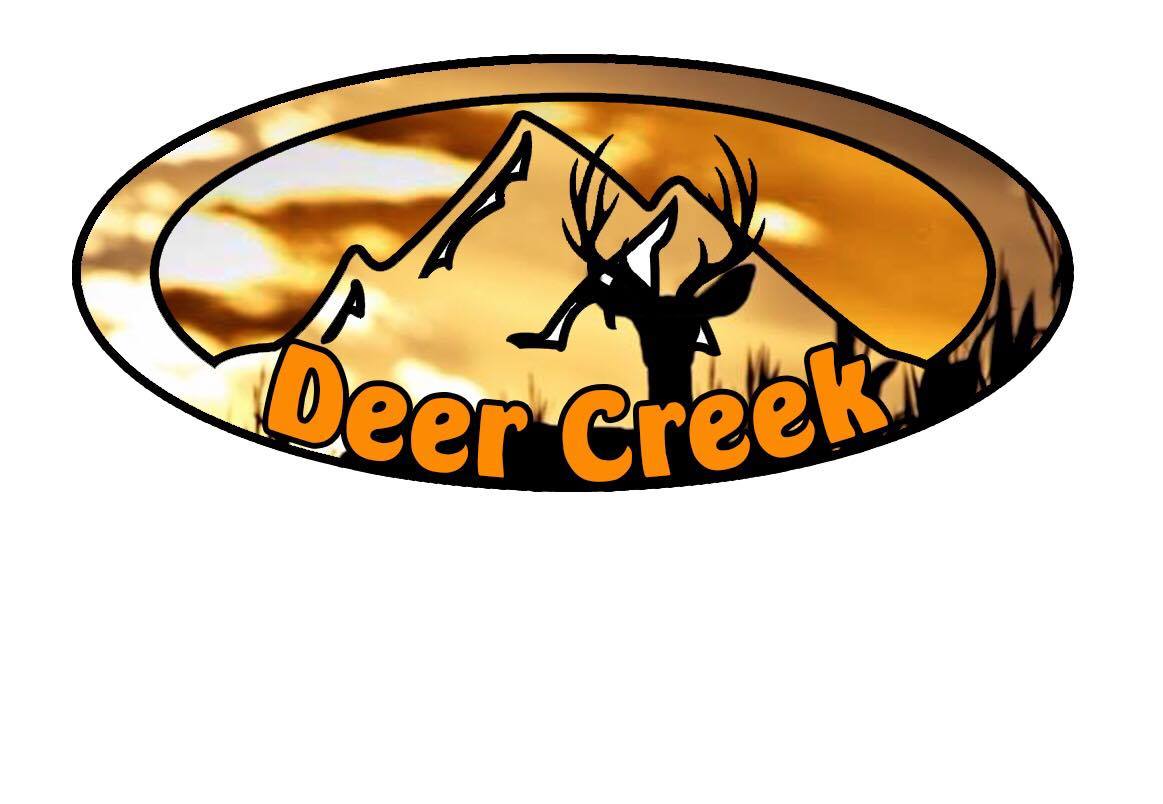